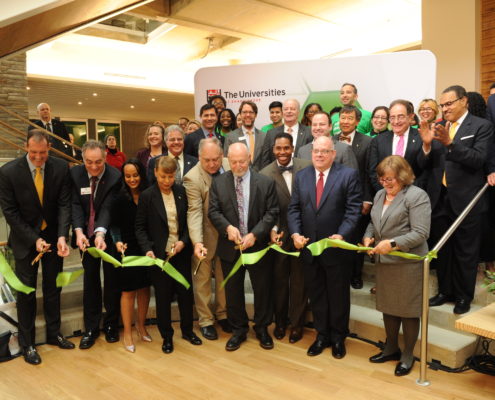 Photo courtesy of The Universities of Shady Grove

On November 7, 2019, the Universities at Shady Grove (USG) welcomed more than 600 people to its Maryland campus to celebrate the opening of a fourth academic building—a $175M Biomedical Sciences and Engineering Education Facility, known as the BSE.

The grand opening event kicked off with a luncheon and program, featuring the presidents of three partner universities: University of Maryland, Baltimore; University of Maryland, College Park; and UMBC. Following the luncheon, guests gathered in the atrium of the BSE to hear from speakers­­—including Governor Larry Hogan—and to celebrate the official ribbon cutting of the building. After the ceremony, guests explored the building and participated in a Science, Technology, Engineering, Mathematics, and Medical (STEMM) Showcase, which brought aspects of the building to life with displays from 14 academic programs and eight industry partners. Students and staff were stationed throughout the BSE to serve as interpretive guides for guests. The event exceeded the set attendance goal by 20%.

As a long time, invested partner in Universities at Shady Grove, Mission Partners previously supported USG on the groundbreaking ceremony for the building and managed complexities of project management, communication, and media support for this critical moment in the organization’s history, and future. The event boasted a strong print and broadcast showing—eleven onsite media teams—and coverage of the event garnered more than 7.8M impressions from 13 news stories, including two consecutive days of coverage in The Washington Post with an op-ed and feature piece on the front page of The Washington Post’s Metro section.

See more examples of our work with USG. 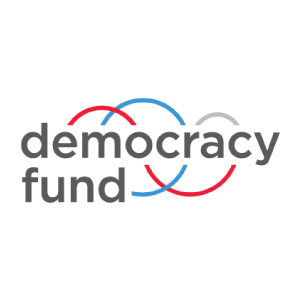 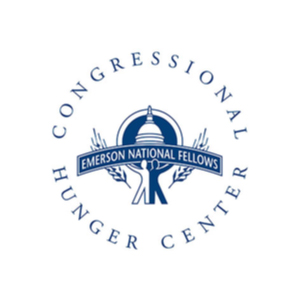 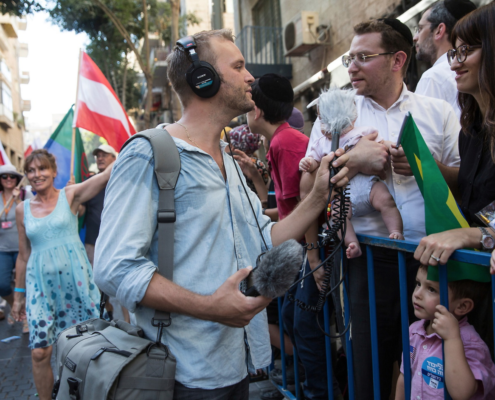 In the summer of 2019, NewsMatch engaged Mission Partners to develop the messaging and strategy for its fourth annual campaign, which runs from November through December. In the wake of “fake news” and powerful politicians’ attacks on the free press, NewsMatch has supported unbiased and independent journalism through a national matching-gift campaign designed to grow fundraising capacity in nonprofit newsrooms and promote journalism as a philanthropic cause. As the media industry continues to evolve, the support NewsMatch provides is more important than ever.

To begin, Mission Partners conducted a comprehensive peer set audit, and then guided NewsMatch and its partner funders through creating a message framework to help align 2019’s campaign. After in-depth interviews with NewsMatch’s newsroom participants and partners, Mission Partners also created the theme of the campaign. Along with messaging, media relations, training webinars, toolkits, and the creation of talking points, Mission Partners updated NewsMatch’s visual brand and created customizable digital and social graphics for newsrooms across the country to utilize. The paid social media strategy was further enhanced by a PSA video Mission Partners worked alongside a third party to create.

The 2019 NewsMatch campaign saw its best-ever #GivingTuesday returns, and of the 198 participating newsrooms, 187 customized or implemented materials provided to them.

Take a look at our impact in our second year as a Certified B Corporation® and the missions we helped advance.